Everything You Know about Yellow Jacket Removal 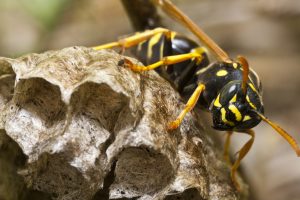 Yellow Jackets are a very common pest that bothers Texas homeowners during the spring. The yellow jacket is easily recognizable on sight when someone knows what to look for, and they are pests that one does not want to keep around due to their aggressive and persistent nature when angered.

The Yellow Jacket’s coloring is what sets it apart visibly from other wasps. With yellow and black stripes that cover their body, it is easy to understand where this wasp gets its name. This zig-zag of coloring is found on the wasp from its head to the abdomen.

Based on their color, some people confuse it with the similarly colored Honey Bee. With a closer look, however, the differences are quite clear. Honey Bees are brown and black and yellow jackets are yellow and black. Where bees have a short, fuzzy body, the Yellow Jacket has a smooth, elongated body that measures from ½ inch to ¾ inch.

The Yellow Jacket has two transparent wings on both sides of its body and two black antennas. The female worker has a smooth stinger that is capable of multiple stings. The queens are orange and black in color and are twice the size of the female workers.

What Makes a Yellow Jacket Different from Other Wasps?

Some of the key differences between the Yellow Jacket and other wasps besides their coloring is that their numbers are much greater than wasps.

Yellowjackets continue building their nests and laying eggs all season long, unlike the wasp that stops after it reaches a preferred size, similar to the size of a softball. For this reason, their nests can reach numbers from 3,000 to 5,000 active workers by the end of the season. To accomplish and maintain this size of the nest, the workers are non stop hunting for small insects, nectar, and water to feed their army of thousands of eggs and gathering wood fiber to build more and more layers of the nest.

When someone spots a nest of yellow jackets in the ground or structure of their wall, they will typically see a few guards at the entrance and non-stop movement going in and out of the nest. Many people mistake them for the honey bees since a honey bee nest also has guard bees and non-stop flying activity going in and out of the hive all day long. Unlike the honey bees and wasps, they will dig deep tunnels in the ground, usually one foot to three feet deep and carve out huge cavities to expand their nests.

Wasps are a more lethargic type of flying stinging insect than the yellow jacket. More often, you may see wasps just sitting on their nest and hanging out more than hunting for food. The reason for this is that they don’t build very large nests, and they lay fewer eggs.

How to Find a Yellow Jacket Nest

Whereas most people may think to look upwards for their nest, these insects generally make their home in the ground.

In the spring, the Yellow Jacket queen will dig a hole straight down into the ground and form a large, paper nest that can resemble a miniature parking garage, holding thousands of eggs. Some nests can be as large as a five-gallon bucket up to the size of an aquarium, all while being hidden underground.

This makes for very dangerous situations when someone is simply mowing their yard, cleaning out their flowerbeds, and tending their garden.

What happens if you’re stung by a yellow jacket?

If you begin to get stung by them, immediately run inside the house while swatting them off of you.

You never know if you just stepped on or brushed up against an active nest. In just seconds, you may be covered in yellow jackets that will attempt to bite and sting you until you get them off.

Since their sting is much more painful, It only takes a few stings from this little insect to cause someone to panic and go to the hospital. In most cases, this is a good idea. But, if you are not allergic, over the counter painkillers usually work. Icing the area where the stung occurred also can help.

Location of Other Wasp Nests

Hornets create nests that hang from trees and can look like a football. You typically won’t find a Southern Yellow Jacket’s nest up in high spaces.

A Paper Wasp typically makes a honeycomb-shaped nest that can be found in the eaves of a home or on window ledges, chimneys, porches, and roofs.

Mud Wasps have different types of names like mud dauber or dirt dauber. Mud daubers form a long, round mud tube that can be seen from the outside of a person’s home, inside of eaves, and in attics.

What do Yellow Jackets Eat?

They are also referred to as “Meat Wasps.” This is because, during the larval stage, these insects consume protein like crickets, caterpillars, flies, mosquitos, wasps, and bees. Aside from protein, these wasps are also attracted to soda, flower nectar, and fruit.

Why Do Yellow Jackets Attack?

They are an aggressive type of wasp. If the entrance to their nest is approached, the guards will emit an attack pheromone which has a musty like smell which we can actually smell. Within just seconds, thousands of Yellow Jackets will flood out of the entrance and attack anything that is not a Yellow Jacket. This is why there is such a danger when trying to remove a nest on your own.

In order to remove a wasp’s nest, you have to approach it. Approaching a Yellow Jacket nest is particularly dangerous because they become incredibly aggressive and have the capability of stinging a victim multiple times.

Someone who is allergic to the venom of these types of insects is susceptible to an intense allergic reaction that can lead to death.

After calling out Bee Safe Bee Removal, our team of professionals will come to your location and survey your problem.

We will exterminate your Yellow Jackets with a pesticide and then remove the nest from your home. From there, we can offer you access to our preventative program that helps to ensure that your home remains pest-free. Get in touch with us today to find out more about the services that we offer in your area.